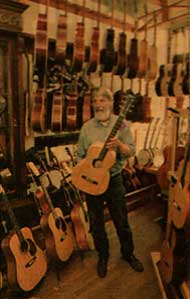 Instrument repairman Wil Bremer – for 20 years a fixture on East Johnson Street – remembers the worst one. It was an electric guitar that had been treated worse than a pinata.

Turns out the guitar owner’s girlfriend grabbed it in a rage that left the instrument looking like something a young Pete Townshend would leave behind after a particularly rowdy Who encore. 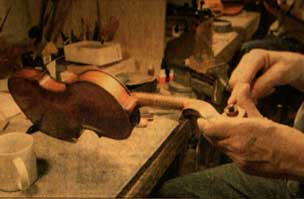 “It was missing chunks,” says Bremer, 53, shaking his bearded face and smiling at the memory.

Bremer fixed the instrument and returned it to playable condition. He brushes the feat aside as easily as strumming a guitar. It is, he says, what he has done for 30-plus years in a career that he stumbled upon while in high school because “I could neer afford an instrument that wasn’t busted and I could never find anybody to repair it.”

Now Bremer’s place, Spruce Tree Music & Repair, has earned international acclaim among fretted (guitars) and string (violins) instrument fix-it shops. On a recent morning, Bremer discussed selling a restored $6,000 guitar to a Reno, Nev., musician; the week before he shipped a banjo ukulele to England; and there was an e-mail the previous day from Japan about repair work.

Inside Spruce Tree, instruments fill the lean store like bouquets in a floral shop. There is space for five employees, three repair benches, hundreds of new CDs – breaking folk music down into a dozen categories from bluegrass to “Scottish and English” – and two ever-present Golden Retrievers.

Each onth, Bremer and his staff repair about 40 instruments, many needing what Bremer calls tune-ups, which include cleaning and a few minor adjustments. Projects take “a couple of hours to several days,” Bremer says. He also keeps a few side projects, including repairing a battered 1887 guitar, going over the course of a year.

Coming from a handy family (his great-grandfather started the tradition by building cabinets in Germany), Bremer opened his first music instrument repair shop – “with a small amount of money,” he says, “and a large amount of naivete” – in Akron, Ohio, in 1972.

A few years later, he moved the shop to southern Indiana, before settling in Madison in 1980, where he did repairs part time out of his apartment.

“Then I worked an office job for six months,” Bremer says, “and left screaming.”

That prompted him to open Spruce Tree in mid-December 1980. Since then he has repaired thousands of instruments. 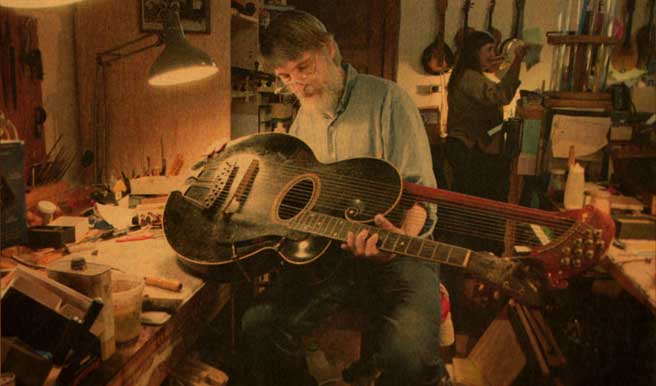 Asked if string and fretted instrument repair is a Zen-like craft, Bremer says, “There are valid elements in that. But what you need to do this work well is a certain way of looking at things. It’s almost an ability to visualize something that you cannot literally see.”

His longtime co-worker Julie Luther, who has worked at Spruce Tree since 1985, tries a different approach to explain the repair work.

“It’s not a straight line from A to B to C. It’s not as formulaic as that,” she says. “The instruments vary a great deal and so does the nature of what’s needed to repair them.”

Even new instruments spend time on the repair bench for adjustments, says Bremer, who plays guitar and banjo.

“The whole business hinges on repairs and restoration to a certain extent,” he adds.

A few national touring musicians, including jazz-bluegrass mandolin player David Grisman and rocker John Hiatt, have been sent to Spruce Tree when their instruments faltered. Folk star Oscar Brand turned to Spruce Tree when Brand slipped on ice breaking his acoustic guitar in a padded bag before a Madison Civic Center show.

On a recent Monday afternoon, Spruce Tree buzzes with activity. Violin and guitar repairs go on at the work benches; a private guitar lesson can be heard in an adjacent room; both dogs sleep on the wood floor; and a man from Illinois arrives with several old-time acoustic guitars and banjos.

“I wonder what you would do to get these in playing shape,” the man says to Bremer.

Bremer studies the instruments, which include an 80-year-old banjo, with an encyclopedic knowledge. He quietly rattles off mental notes to himself about each instrument, then looks eagerly at his customer.

“Where do you want to start?”